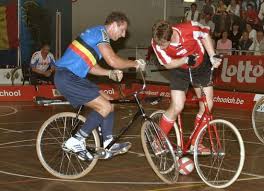 Cycling is on the up. Thanks to the magnificent efforts of Team Sky and the British Olympic team, it seems the sport can do no wrong. No lesser publication than the Wall Street Journal carried the headline “ is all about the bike”. With all this success, the sport’s profile is changing. Our cycling heroes now command front page headlines and are household names. The Sun even provided cut out and stick on sideburns before Brad’s time trial. No doubt about it, cycling is in serious danger of becoming the National Sport.

Now all this has to be good doesn’t it? All this positive press has to help build respect from drivers, give us more clout in pushing for improved facilities, encourage more kids to take up the sport. More cyclists on the road, more love for cyclists off it – what’s not to like? Whilst I’m attracted to the sort of Olympic legacy that sees happy smiling drivers waving me through as I cycle unhindered to work, I have to confess to a slight unease. I’ve been somewhere like this before and I’m not sure I like how it all turned out.

In the1980s I loved football. To me, there was nothing to beat standing on a windswept, crumbling terrace to watch a group of mostly unknown players knock lumps out of each other as rain dripped down my neck through a hole in the roof. Crowds were small, tickets were cheap, the facilities were primitive and the star player posed in the programme on the bonnet of his Ford Capri. Football and the team I followed were deeply unfashionable. It was brilliant. Players stayed with the club for years (and not just the bad ones on fat contracts), there was a thriving fanzine culture, you felt a bond with the club that made you stick with them through the bad times and in my club’s case, there were a lot of those.

Then came the 1990 World Cup, Gazza cried on live TV, Pavarotti sang the theme tune. Football was suddenly mainstream, everyone wanted a piece. Sky TV got involved, the Premier League followed and the Ford Capri’s went to the scrap yard. The money brought improvements. All-seater stadiums were safer, attracting more women and children. The leaky roofs got fixed. An influx of foreign superstars improved playing standards. It wasn’t all good though – the development of player power and big wages saw a virtual end to loyalty. That young player you were previously able to watch develop moved after a season to sit in Stoke’s reserves. Ticket prices went up, the atmosphere got worse, the bond was broken. The sport I loved was not the same. I drifted away and found cycling.

There are some similarities with cycling’s current boom. The involvement of Sky is an obvious one and I fear the day that the Tour de France becomes exclusive to Mr Murdoch’s TV channels may not be far off. There is money to be made from the current British interest in the sport and the crowds that flocked to Box Hill despite having to pay for the privilege will not have gone unnoticed. Whilst anyone watching the articulate interviews given by our cyclists during the Olympics might think they little in common with Premiership footballers, there are similarities in their relationship with the transfer market at the end of the season. Ironically, it could be Team Sky that have to accept the consequences of this, if Chris Froome’s amazing summer continues.
this article originally appeared on Velobici.cc
Posted by Unknown at 3:33 AM