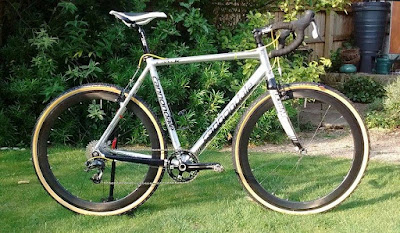 In a previous post I've mentioned the "Trig's broom" nature of my cross bike, with numerous bits and pieces replaced through necessity. I've spent this summer faffing away on the bike entirely through choice in an attempt to make it better. 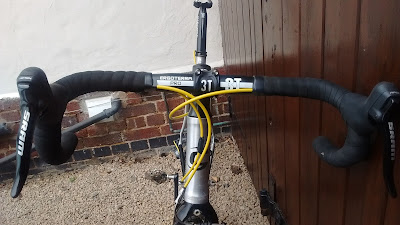 First up I changed the handlebars. I realised the old ones were a bit narrow and was attracted to the idea of bars that flare at the drops. The 3T Ergoterras are designed specifically for cyclocross and so far I find them to be a big improvement with less shoulder and neck ache on longer rides. I replaced the Fizik Arione saddle for a San Marco Concor - specifically one designed for mountain biking. I love the comfort of the Arione on my road bike, but found the long "tail" to occasionally get in the way on remounts. Again, so far so good. A Ritchey WCS alloy seatpost has been moved over from my road bike - it's a quality bit of kit and looks great.

The wheels are an eBay bargain - £114 for a pair of Neuvation C50s only previously used on the road. I've added Challenge Limus tubulars after much research and badgering of cyclocross experts. I'm hoping to gain a bit more grip and benefit from the lighter wheels - time will tell. 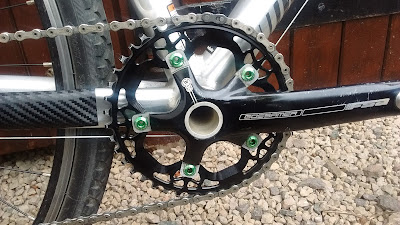 The drive train has also had an overhaul as I've gone to a single front chain ring in a DIY (and budget) version of SRAM's CX-1. Apex levers - another eBay bargain - replace the old 105 set up, with the supernumerary mechanics stripped out of the left side using this handy guide from Cyclocross Magazine. An X-7 mountain bike rear mech with its rolling clutch mechanism helps chain retention when paired with the Absolute Black narrow wide chainring obtained from a clubmate. A test ride on a rock-hard, rutted bridleway failed to unseat the chain despite rattling out most of my fillings. Last season, badly timed dropped chains cost me hard earned positions in two races, so that's got to be positive. Overall, my modifications have probably saved me about a kilogram in weight without breaking the bank. Hopefully I can take advantage when the season starts at the end of August.
Posted by Unknown at 11:57 AM