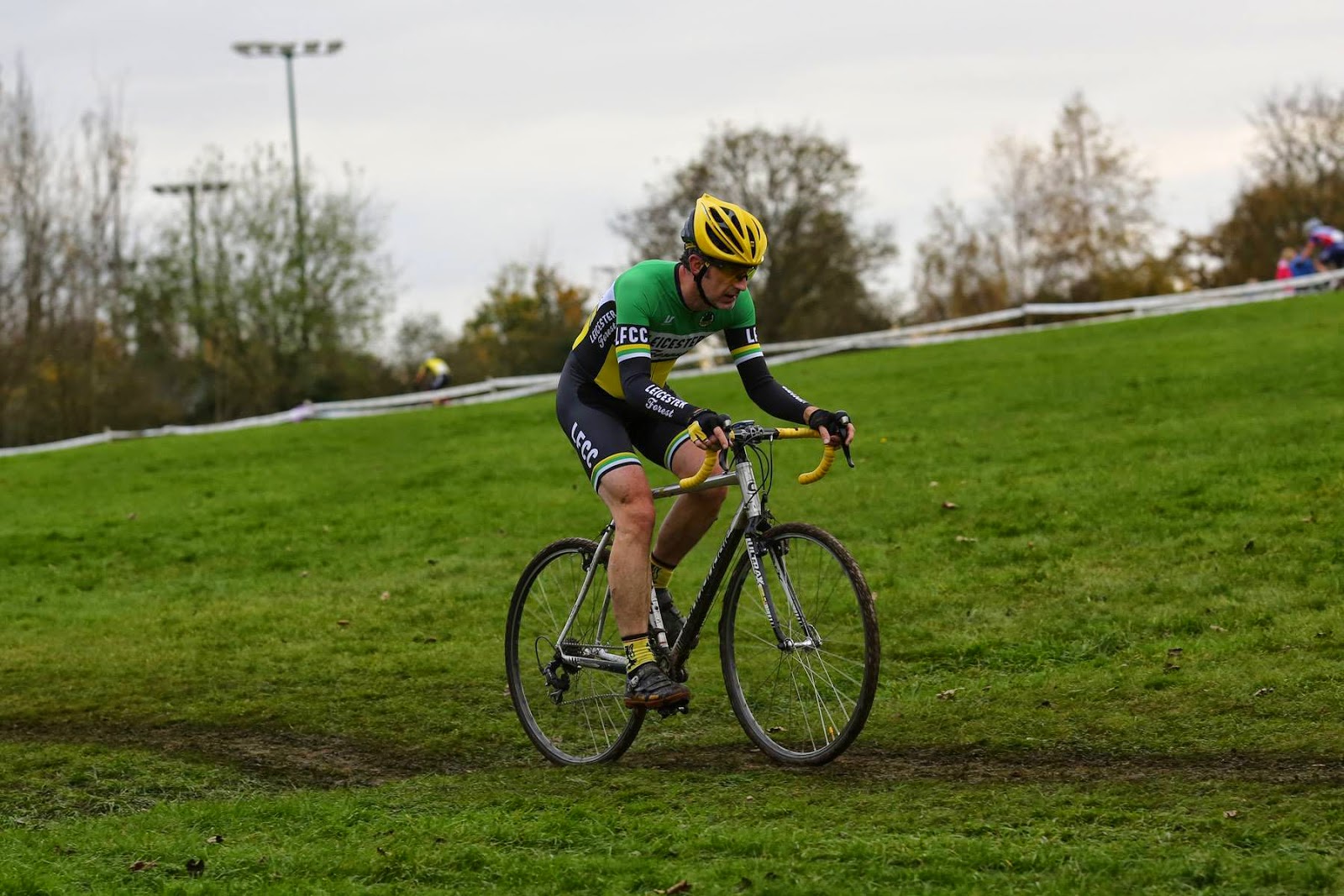 Looking at my results in the West Midlands Cyclocross League this year, it's clear I am doing significantly better than last time around. In 2013, I finished all my races in the bottom half of my category (Vets 40-49) and more often than not, comfortably so. This year I've reached the dizzying heights of the top 20% in one race and never out of the top half. I'm finding myself in battles with riders who last year easily beat me. Which has left me wondering... why is it I'm apparently doing so much better and how can I build on my improvement to get faster still? Here are my theories:

Training harder
Towards the end of last season I started using my turbo trainer between races to do interval sessions. This coincided with an improvement in my finishing positions. This year I got the turbo out before the season started. Using workouts from Simon Burney's cyclocross training guide I have forced myself into the garage every week. It's not pleasant, but it seems to be helping.

Practising technique
This year I have managed to get a weekly club cyclocross training session up and running. It started small - just me and a 16 year old girl - but as it said in Cyclocross Magazine "if you build it, they will come". Numbers have increased and we now have the enthusiasm and expertise of Nick Walling to run the sessions. Even the lack of floodlights has not stopped us blasting round the park every week in the winter darkness. My cornering, remounting and all round handling have improved dramatically. Nick's son Josh has helped with "race craft", mainly by riding into me on corners!
Improved kit
No major changes to bike or tyres, but I have got a shorter stem on Nick's advice - down from 110mm to 80mm. The bike feels more reactive on rough sections and I seem to be able to heave it up the hills better. I even wore a skinsuit for one race (it had been gathering dust since I gave up time trialling). Not sure it made me faster, but it did make me feel Iike I had to try harder!

More Competition
The fields for the WMCross League races are getting bigger - up to 150 riders on the starting grid at times. This makes for a bit more chaos after the whistle, but my improved results have seen me gridded near the front, giving me a definite advantage. Leicester Forest CC has also been much better represented - clubmate Wayne beat me in a pre-season race at Mallory, creating some anxiety about holding on to my Vets trophy. It was at this point I got out the turbo trainer (see Training Harder) He'll not make that mistake again... hopefully.

There may be other reasons - the dry summer has kept the worst of the mud away which probably suits me. Though to paraphrase Greg Lemond, I don't think cyclocross is getting easier, just faster: that post-race nausea is as bad as ever.
Posted by Unknown at 6:55 AM