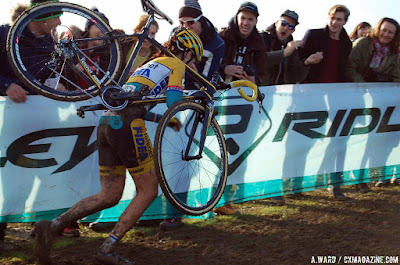 Cycling is booming in the UK. Kick-started by the 2007 Tour de France Grand Depart in London and fuelled by success on the track and road, the popularity of what was once a minority sport is soaring. Riders like Mark Cavendish, Victoria Pendleton and Bradley Wiggins are household names, cycling clubs and mass participation rides are growing fast. Le Tour’s return in 2014, this time to Yorkshire, saw 2.5 million enthusiastic spectators line the route. Cycling in the UK has become decidedly mainstream. Cyclocross has been late to the party. Resolutely on the fringes it has yet to seize the public imagination in the same way as its tarmac and velodrome-based cousins. Despite this, local leagues are seeing record numbers taking part across all categories. Established road riders are increasingly looking to Britain’s fantastic network of bridleways and forestry tracks to bring some variety to their weekend rides. Cyclocross in the UK has the potential to become huge and the third round of the Cyclocross World Cup at Milton Keynes could prove to be the catalyst.

Arriving early at Campbell Park in the heart of Milton Keynes itself, it was clear that something special was in the air. With over two hours to go until the Elite Women’s race, a crowd of hundreds were getting behind juniors used to performing in front of dozens. The Expo was in full swing with free cowbells, flags and even bottles of beer being enthusiastically snapped up. Stalls peddling multi-coloured bobble hats rubbed shoulders with displays of high end bikes and handmade tubulars. With the teams setting up shop next door it was clear that this was not a level playing field. The space age Winnebago of Nys contrasted sharply with the busy gazebos of British Cycling and the one car set up of Neon Velo. Fans mingled with superstar riders and mechanics, checking out bikes and tyre choice – a far cry from the cloistered existence of millionaire soccer players that the British public are used to. As race time approached, the crowd swelled to 8000, boosted no doubt by curious townspeople, dragged away from their shopping by the clanging of thousands of cowbells. Despite the large number of Flanders flags being waved, this was definitely a British affair. No Leffe in the beer tent, no frites and mayonnaise – it was British ale and fish and chips all the way. That beer tent was popular, but not the jam-packed affair familiar to supporters on the continent. Pints were of secondary importance as the women’s race started with a large and raucous crowd lining the course.
As the riders hit the first off-camber section they were to become acquainted with another British phenomenon – thick, gooey, slippery mud - and lots of it. Ironically it was local hero Wyman who suffered as the predictable chaos saw her slip off and slip out of contention. Not that it dented the enthusiasm of the supporters. Cant and Compton crossed the line to resounding cheers – despite the fact that most of the crowd couldn’t tell who’d actually won the photo finish. The volume went even higher as Brit Nikki Harris took the final podium spot. Campbell Park was turning out to be the perfect venue, with the Belvedere Ridge providing impressively steep and slippery banks and excellent vantage points for the large and colourful crowd. 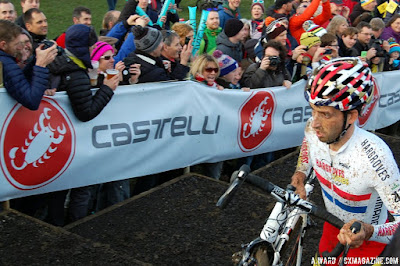 And so to the Elite Men’s race. The steadily increasing blood alcohol level of the crowd might have had a part to play as the atmosphere was turned up to 11. As in the women’s race, the muddy off camber section at the end of the finishing straight wreaked havoc. This time Sven Nys came off worse, losing his chain and ending up third from last. Whilst Ian Field benefited from the wildest reception the crowd got behind every rider with gusto, right to the end of the race. Mark McConnell and his beard, struggling at the back, was cheered as vigorously as Sven as the Belgian worked his way back through the field with impressive smoothness. Perhaps inspired by the noise, Jeremy Powers rode rather than ran the tough set of steps at the end of every lap, winning plenty of fans, if losing a bit of time in the process. British Cycling had entered a young team to support Ian Field with teenager Jack Ravenscroft performing flamboyant and wholly unnecessary bunny hops to entertain the crowd. Still buzzing at the end of the race, Jack was amazed by the atmosphere –“I’ve raced in Europe and the USA, but never experienced noise like it”. Another close finish saw Pauwels pip fellow Belgian Vantornout in the sprint with an emotional Field coming in a brilliant 12th to cap a fantastic day.

Where does British cyclocross go from here? Hopefully the UCI will have been impressed enough to come back next year. Hopefully British Cycling will see the potential and take the same approach to investment that has benefited track and road. Hopefully the likes of Ian Field, Nikki Clarke and Helen Wyman can become as much household names as Cavendish, Pendleton and Wiggins. Hopefully Milton Keynes can turn out to be cyclocross’s Grand Depart: we need to find a use for all those cowbells!