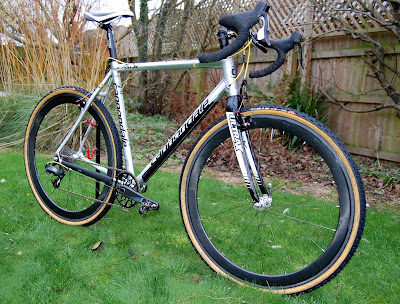 I've blogged in the past about the efforts I had gone to in an attempt to improve my bike and hopefully improve results. Upgrading, of course, is an integral part of the cycling experience and when AbsoluteBlack launched the cyclocross version of their oval chainring, my faffing sense started tingling. I had been impressed by the performance of the round chainring that I'd adopted in my single chainring set up, but liked the sound of lighter and faster (who wouldn't). After a bit of ebaying I had a SRAM CX-1 chainset and thanks to the excellent AbsoluteBlack website, I was soon set up with a direct mount 38 tooth oval chainring. Very lovely it looks too... 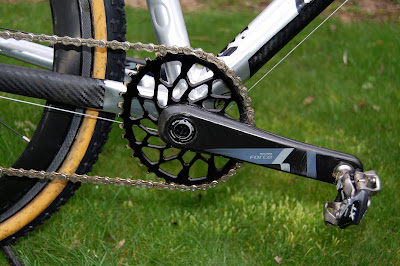 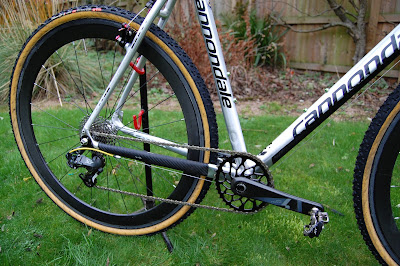 Important though looks are, it's peformance I'm really after and here the chainring doesn't disappoint. My first test ride on the road and I was sure I could feel the difference - like riding with a gentle but constant tailwind. Get the bike off-road and that benefit seems to persist - a feeling supported by a mate who borrowed the bike for a quick spin. The pedal action seems to be smoothed out, less bouncy. The acid test really comes in cyclocross races of course, where I can compare with previous performances against my regular rivals. 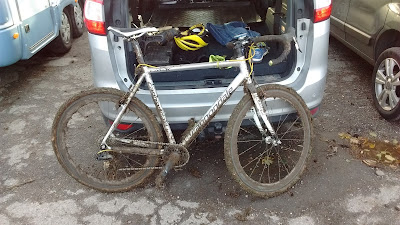 This season has been something of a damp squib, with family and work commitments leading to quite a few missed races. My first chance to try the chainring in anger came in the Notts and Derby CX League race at Markeaton. A muddy course with lots of twists and turns, I didn't do as well as hoped, although I noticed I was doing better than my rivals on the one long climb. An even muddier race at Darley Dale saw me improve significantly - the course featuring long drags in thick mud and less of the technical stuff. It seems the benefits of the oval are more pronounced when I can ride with sustained power and not worry too much about technique. The latest test was in the West Midlands League at Mallory Park  - a race that also stood in as my club championship. Lots of draggy, thick mud and lots of off-camber. This was my best performance in a cross race ever - 6th in the V45 category and winner of the club veteran trophy. I felt really strong throughout and was able to ride sections that others were walking. When I did need to run the lightness of my new set up really helped, with the weight of my bike now down to an impressive 7.5kg.

Some of that will be due to the training I have been putting in, but I'm sure the chainring contributed. I had no issues with my drive train despite three of the muddiest races I've ever competed in. The AbsoluteBlack oval chainring definitely makes faffing worthwhile.

Eagle-eyed readers may also notice that I have some new brakes - more about them next time.
Posted by Unknown at 1:28 PM