I've been very impressed with AbsoluteBlack's oval chainrings. After fitting one to my cyclocross bike, I went on to obtain my best ever results in the last three races of the season, with two top ten finishes in the Central Cyclocross League. A total of £15 in prize money for the season may not be enough to build a career as a racer, but it certainly paid for the post-race bacon sandwiches. There are many factors that go into good form of course - training, fitness, preparation - but I've always focussed on those areas in the past, without the dramatic improvements in my finishing positions. There's no doubt that using the oval chainrings gives a feeling of more power through the pedal stroke and feeling strong in a race increases confidence (always a good thing). No matter what the reasons, I'll take the improvements and will be sticking with the oval! I've noticed there's been a sudden surge in my clubmates shopping at AbsoluteBlack which might scupper my chances of retaining the Leicester Forest CC Veterans Cyclocross trophy. 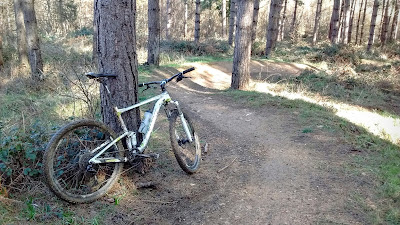 With the cyclocross season over, it was time to get the mountain bike out and start preparation for the XC season, in particular the Friday Night Summer Series. In truth, this preparation mainly involves having a bit of a laugh off-road, but I have been working on my technique amongst the fun and frolics. A few trips out to Wakerley Woods to practice on a series of berms has seen me get a bit smoother and faster. It's not the most challenging course, but for a mountain bike newby like me, it's perfect for a quick training session. Another AbsoluteBlack oval now adorns the mountain bike and again I have seen an improvement in my speed on the non-technical sections, particularly uphill.

Hell of the North Cotswolds

Speaking of challenging courses, they don't come much harder than the Hell of the North Cotswolds. I was recommended this event by Leicester cycling legend Steve Hill. Described as the original and classic British endurance cycling event, this year would be the 32nd edition of the HONC. Riding my mountain bike after a 3 week no-cycling holiday, I knew I was under-prepared. Unfortunately I hadn't anticipated how tough the ride would be - 63 miles of continuous hills over some pretty rough and muddy ground. Seven hours later, I had climbed 6300 feet, crashed, got cramp in every muscle in my legs and generally decided that cycling was not for me. Time dulls pain of course and within a couple of days I was already thinking of entering again next year. A really well organised and friendly event with great food and a great atmosphere, it should be one for everyone's diary. 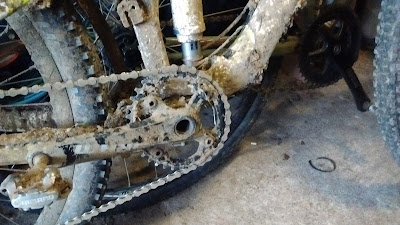 The oval chainring behaved itself throughout, despite some thick, heavy mud and rattly decents. My chain stayed firmly in place and the drivetrain never let me down - it was my legs that caused the trouble!
Posted by Unknown at 1:50 AM