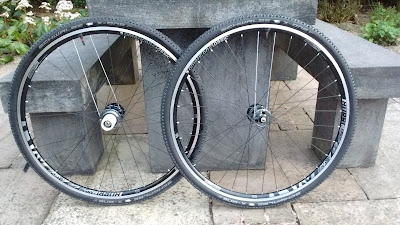 Before I got into cyclocross, I spent approximately no time at all worrying about tyre choice. I stuck a pair of Michelin Krylion Carbons on my road bike and basically forgot about them until the profiles turned a bit square-shaped 5 years later. Since getting into the muddy stuff however, I have spent more time obsessing about the pros and cons of various bobbly bits of rubber than any other part of my cyclocross set up. My current race wheels are shod with Challenge Limus tubulars and very pleased with them I am too - they perform excellently in the thick, slippery mud of the local cross courses. I do feel a need to handle them with kid gloves though. After the faff of getting them glued on (with the marvellous help of Nick Walling) I daren't risk damaging those lovely soft side-walls when out training on the rocks and gravel of the local bridleways. Practical they are not.

I've always been interested in the idea of tubeless for cyclocross. On paper I was attracted to the idea of being able to run low tyre pressures without having to glue various parts of myself to my wheels. I also liked the sound of being able to change tyres to match the conditions without having to invest in a garage full of spare wheels. A couple of years back I tried a set up using Stans Alpha 400 rims coupled with Michelin Muds. At the time there was a dearth of tubeless specific cross tyres, but I was assured this combination would be fine. Here I encountered the first potential drawback of tubeless - getting the tyres onto the rims. Try as I might, I could not get them to hold air. In the end a trip to South Wigston Cycles to take advantage of Graham's massive compressor saw me right, but this did seem to defeat one of the objects of the whole affair. The final nail in this experiment's coffin came after a fairly dramatic "burp" riding down a rocky and treacherous descent that saw me clinging on for dear life as the tyre completely left the rim. After a bit of internet research, it appeared that the Alpha 400s were not really suited to cyclocross tyres and I eventually sold them to a roadie in my club.

My interest in tubeless was rekindled after my experience on the Three Peaks. The top riders all seemed to be riding tubeless set ups, including winner Paul Oldham, who used the Alpha 400s that I had (perhaps rashly) discarded. I found the clinchers I had ridden to be particularly heavy - something I paid for on the long climb up Pen-y-Ghent and was looking for ways to save weight for any future attempts. A timely visit to the Winstanleys Bikes website saw a bargain pair of American Classic Hurricanes winging their way to me - I just needed to find the right tyres. It was then I read about Schwalbe's X Ones. Described as Tubeless Easy, apparently these could be fitted with a simple track pump. Admittedly sceptical after my last experience I decided to give them a try. 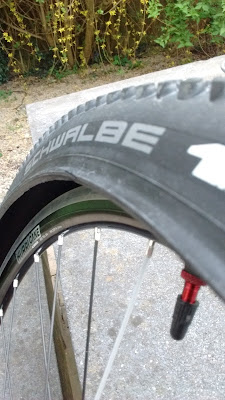 The first thing I noticed about the tyres was the design of the bead. As you can see from the photo, this is significantly wider and flatter than a standard tyre bead. Fitting the tyre onto the Hurricane Rims took a bit of thumb power, but was helped by Schwalbe's Easy Fit mounting fluid - basically a slightly soapy liquid with a built in sponge to allow easy application to the beads. After that I was amazed to find that a track pump truly was all that was required to get the tyre mounted: 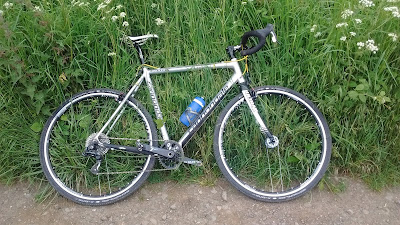 The tread on the X Ones is not an aggressive one - more like a Challenge Grifo than a Limus. I've taken the bike out on some rough bridleways and found handling confident in dry conditions and on grassy tracks but haven't yet had the chance to try them in some decent mud. I suspect they will find their niche in early season courses where I might be tempted to ride them ahead of the tubulars. I will post updates as the weather deteriorates! I am beginning to wonder if this might be a suitable set up for the Three Peaks (should my entry be successful this year), so I'll be giving the tyres some serious hammer over the next few weeks to see how they hold up. Watch this space...
Posted by Unknown at 1:48 PM