So, 8 weeks in, are the X-Ones living up to their early promise? The short answer is yes. So far, so very good, which gives me a bit of a dilemma... 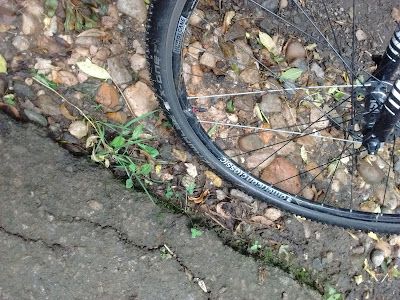 The Met Office claims that this summer has been wetter than average, but that doesn't seem to be my experience. Out riding on the trails around Leicestershire and Rutland, there seems to be a distinct absence of mud. On recent rides, the ground has been baked pretty hard - even heavy rain seems to dry out very quickly. This has led to some bone-shaking rides which have tested my fillings to the limit. Not that the conditions have bothered the X-Ones. They've stayed puncture and burp free, despite some uncompromising hits on the rutted and occasionally rocky trails. A few visits to Wakerley Woods to improve my handling on the singletrack have exposed the tyres to some nasty sharp gravel sections, again with no difficulties. I have even started making an effort to hit some boulders fairly hard to test the tyres to the limit, but they have shown no signs of giving way. Admittedly, practically all my current training is aimed at the Three Peaks, so I have mostly been running higher pressures than I would normally - around 60 psi. I decided to try them at 45 psi yesterday after some rain. Grip, handling and comfort improved and the tyres stood up really well to the broken tarmac, rocks and random housebricks of the field roads I took in. The only time I felt the tyres to be a bit less secure was when I ran a much lower pressure (below 30 psi) for a cyclocross training session with Dean Barnett. Racing on a steepish off-camber section I felt the rear tyre collapse under the strain - no loss of pressure or burping, but enough to make me back off on the next lap.

Which brings me to the dilemma. With the tyres performing really well in the sort of conditions prominent in the descents of Whernside and Pen y Ghent, could my set up survive the Three Peaks? The appeal is obvious - tubeless means less weight to carry up the long climbs. With the risk of pinch flats removed, the opportunity to run lower pressures would make for a more comfortable ride than with tubes. My concern is around durability. The Smart Sams I ran last year were heavy and don't handle as well as the X-Ones, but they survived the whole race without a single puncture. Dave Taylor of Schwalbe UK, gave me this advice:

Tricky to say, certainly if the weather changes. Smart Sam are the go-to tyre for this challenge although sponsored riders will use Racing Ralph or Rocket Ron (33/35c) or a combination of both. These are LiteSkin tyres so not particularly robust whereas the Smart Sam’s although heavier are more robust. Three Peaks will be a nice test for the X-Ones if you decide to use them and to be honest if you hit something that ends the life of the X-One then it will most likely also end the life of a Ralph, Ron or Smart Sam. For absolute piece of mind in all conditions use Smart Sam. For maximum performance and speed use X-One. Carry a spare tube with either.


Before extensively testing the X-One, tyre choice for the Three Peaks was a no-brainer. The great performance of this set up is giving me food for thought. I would welcome the advice of any experienced Three Peakers out there..

Cycle Systems Academy got in touch via twitter to point me to this podcast with cycle-tech legend and 3 Peaks addict Keith Bontrager - http://www.cycle-systems.co.uk/archive/201604

In it Keith recommends tubeless, but at 100 psi. Last year's winner Paul Oldham also runs tubeless, but told me he runs 45 psi for comfort. The plot thickens! Further tweeting reveals Keith's logic - Paul is a better rider, picks better lines and avoids hitting rocks hard. Keith likes the margin of error that the higher pressure gives him and recommends a tough tyre like Bontrager CX3. I suppose he would :-)